When evaluating affordable housing and/or revitalization, the pocket neighborhood concept is one method to develop infill lots.

Most towns and cities have zoning regulations that limit housing to detached single family homes on large private lots with a street in front. Forward-thinking planners see pocket neighborhoods as a way to increase housing options, limit sprawl, and encourage infill while preserving the character of existing neighborhoods.

Pocket neighborhoods are a pattern of housing that fosters a strong sense of community among nearby neighbors, while preserving their need for privacy. Clustered groups of neighboring houses or apartments are gathered around a shared open space — a garden courtyard, a pedestrian street, a series of joined backyards, or a reclaimed alley — all of which have a clear sense of territory and shared stewardship. 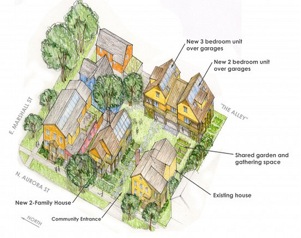 Some of the perks of an Aurora, Colorado pocket neighborhood include: