Case Study: Pittsboro is at the heart of one of the fastest growing counties in the state. 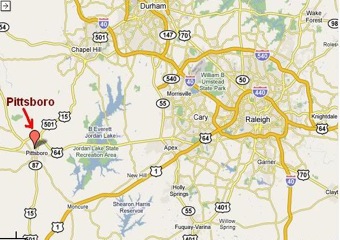 As the county seat, Pittsboro is home to the Chatham County Government Complex employing 1,300+ people. It is also home to Central Carolina Community College, which offers certifications in Sustainable Agriculture and a Natural Chef Culinary program, Sustainable Energy Systems and Alternative Building Techniques, among others.

Pittsboro is ideally situated at the intersection of US 64 and Hwy 15-50. It is 16 miles south of University of North Carolina at Chapel Hill, 25 miles from Research Triangle Park and 32 miles to Raleigh. Pittsboro is a short drive to recreation areas at Jordan Lake State Park and adjacent to 960 acres along the scenic Haw River. Pittsboro was featured in the April 2004 issue of "Southern Living" and the June 2012 "Christian Science Monitor" cover story.

Residents of Pittsboro embrace small town values of respect for one another and a strong sense of community. Its people are a diverse group of professionals, artists, farmers, merchants and students, and it is home to the North Carolina Zen Center. Pittsboro supports software developers, bio-fuel research and production, antique shops and art galleries.

Chatham County continues to have a fairly low unemployment rate as compared to the other 100 counties in the state, even during the recession. The county’s average unemployment rate was 7.3% as compared to 9.4% for North Carolina as a whole. Most of the job losses in the county since 2001 were manufacturing jobs, because manufacturing still represents a fairly large percentage (33%) of jobs in the county.

The 2010 Census indicated that more than 55% of the county’s workforce worked out of the county. The average commute to work is just over 27 minutes each way.

The 2010 Census indicated that 35.1% of Chatham County’s working age population (over age 25) has received a Bachelor’s Degree or higher, which places us well above the state average of 26.1%. On average, Chatham County’s women are more likely to have higher education degrees than men. However, minority populations in the county, including African American and Hispanic residents, are much less likely to have completed a college degree.

The 2010 census showed Chatham County’s median household income is $66,038, a significant increase from the $51,794 in 2007, and well above North Carolina’s median income of $45,570. However the percentage of individuals living in poverty was estimated at 12.2%—lower than the state average of 15.5%, but still significant. This statistic highlights Chatham County’s challenge: serving residents at extreme ends of the income spectrum.

A significant percentage of households in Pittsboro and within a eight-mile radius of the Courthouse earn less than 80% of the mean income. This is one of the driving factors behind the need for “affordable living” in Pittsboro.